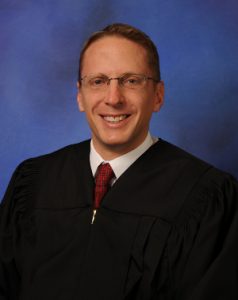 While in law school, Judge Joe externed for Judge Lloyd D. George here in Las Vegas. That was a great experience and first planted the seed or thought for him to one day become a judge. Until he was appointed by Governor Sandoval in 2015, Judge Hardy was the co-managing partner of the Las Vegas office of Gordon & Rees—one of the 100 largest law firms in the country. Notably, he represented individuals and business entities in all types of civil litigation, both as plaintiffs and as defendants.

As many of you may know, Judge Hardy first ran for judge in 2014. Although he did not win that election, with your help he came within 6 points of being elected despite being outspent by nearly 3 to 1. Almost immediately after that election, Joe applied to be appointed as a judge. Joe was one of 25 applicants for two seats. Through an extremely thorough vetting process, Judge Hardy was selected as a finalist in both seats by the Nevada Judicial Selection Commission and was then appointed by Governor Sandoval to be the district court judge in Department 15.

Prior to his appointment, Judge Joe was an arbitrator for the Better Business Bureau and served on the Taxicab Authority board as well. His experiences on that board and as an arbitrator gave him extensive training in making tough but fair rulings and decisions based on the law and evidence—just like he now does as a district court judge. As an attorney, Judge Hardy always volunteered for pro bono work and has also done extensive volunteer work for the Boy Scouts of America.

Shortly before being appointed as a judge, he was recognized for the second year in a row as one of the top 100 attorneys in the Mountain States by his peers in Super Lawyers Magazine.
Judge Hardy thoroughly enjoys serving our community as the district court judge in Department 15 and asks for your support in November to help him keep the best job he’s ever had.

Remember, “When you go, vote Judge Joe!”
Thank you.

Paid for by the Committee to Re-Elect Judge Joe Hardy, Jr.